How To Prepare for Oregon Winter Road Trips

9 Common BMW Problems and What To Do About Them

Advancements in automotive technology have made driving more accessible and safer for a majority of drivers. However, they also open up more ways for the electrical system to go wrong due to its complexity. Modern cars are more reliant on their electrical systems for full functionality than older vehicles. If any part of the electrical system fails, including the battery, the car will often exhibit multiple symptoms.

Electrical problems are easily misdiagnosed. Watch out for these common symptoms of problematic electrical systems.

All car engines require electrical power to start. The battery provides the electricity to the vehicle’s spark plugs. The spark plugs provide the spark needed to ignite the fuel in the car’s engine. If the engine doesn’t start correctly, this could be an indication that something is wonky with the car’s electrical system. Most often, starting issues are a result of a discharged or dead car battery. However, a problem with the engine starting can also indicate an issue with some other component of the electrical system.

If the car makes clicking noises upon starting, the vehicle may not have enough current flow in its electrical system to start the engine. Accidentally leaving a dome light on or a door open can discharge the battery and result in a clicking noise upon an attempted start. The battery may also be at the end of its useful life, and it may need replacing. However, a clicking noise can also mean the starter or alternator has problems.

If the driver hears a grinding noise when the engine starts, the car’s starter or flywheel ring gear might be faulty. High-mileage cars are more likely to have issues with their electrical systems than lower-mileage vehicles. It’s a good idea to take the car to a reputable auto mechanic to address any electrical problems occurring during the vehicle’s startup. 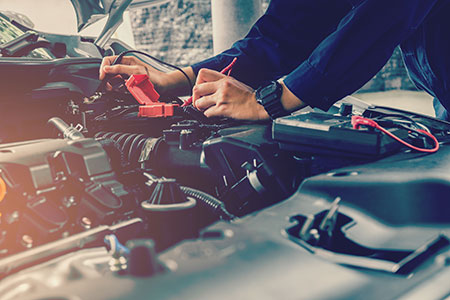 A discharged or dead battery causes electrical issues. Without a functioning battery, the car has no power source. However, make sure to check other components of the car’s electrical system before replacing the battery. Car batteries last about five years, and they last an even shorter amount of time in warmer climates. However, a problem with the alternator could also be at fault if the car’s battery keeps discharging for seemingly no reason.

Additionally, make sure to check the battery cables for corrosion. Make sure they’re correctly connected. If the car still doesn’t start, consider taking the battery to a mechanic to have it tested. If the mechanic concludes that the battery isn’t at fault, the issue is somewhere else in the car’s electrical system. The next step is to check the alternator and battery wires. After that, an experienced technician will need to investigate the vehicle to find the problem.

If the lights fail, flicker, or dim often, the vehicle probably has an electrical issue. It’s critical to have the electrical problem addressed as soon as possible because lights are crucial to the vehicle’s safe operation. Turn signals, headlights, foglights, and brake lights keep drivers safe and ensure they can communicate with other people on the road. If the car’s electrical system is faulty, the lights may dim. Dim lights usually indicate a charging failure with the battery or a universal low system voltage. However, loose or poorly fitted wires can be the problem. Additionally, a malfunctioning alternator belt can cause dim lights.

Corrosion of the battery wires or other electrical system components also leads to dim lights. A car owner’s best bet at adequately diagnosing and fixing a problem with the car’s electrical system is taking the vehicle into a professional auto repair shop.

Sometimes a fuse will blow in the vehicle’s fuse box for no reason. However, if drivers notice that multiple fuses are blown in a short period, this could indicate an issue with the electrical system. A vehicle’s fuse box is designed to protect vulnerable electrical components from drawing too much current. Make sure to take the car to an automotive professional to diagnose the problem if short-circuiting is suspected. Driving a vehicle with electrical issues can damage the system further and can result in injury if the car stops working while someone’s driving it.

As mentioned before, electrical problems in a vehicle can be challenging to diagnose, especially in newer models. Every circuit in the car needs a power source, and the circuits must be continuous. Most electrical devices in vehicles require a minimum voltage to operate as expected. Ultimately, unless the driver has significant experience or familiarity with their vehicle’s electrical system, it’s best to take the car into an auto repair shop.

It’s okay to check things out under the hood. Unless the vehicle is a hybrid with a high-voltage battery, there’s no real risk of getting electrocuted by any of the vehicle’s electrical components. If the car is a hybrid, avoid direct contact with the battery and wiring. Make sure to take the car to a mechanic for further investigation. No one wants to start a fire accidentally.

How Can Steve’s Imports Help?

The highly-skilled and trained technicians at Steve’s Imports in Portland, Oregon can help accurately diagnose and repair electrical issues in many different makes and models of vehicles. Steve’s Imports can also handle foreign cars, and they have all of the necessary technology and tools to complete needed repairs. Call today for an appointment!

9 Common BMW Problems and What To Do About Them